This is an odd question for me, although not for one of my very best friends. For the sake of protecting the flagrantly guilty, we’ll call her Beth. Beth is a rapacious reader. Her flat is lined with bookcases, often stacked precariously on top of each other. Books are packed onto them three-deep, covering every subject you can possibly imagine. I myself have bought her romance novels, books about surviving in the wild, an atlas of world history and a collection of maps designed by a teenage computer genius.

You can tell which books Beth is currently reading by the weird objects she uses to mark her pages. The silver paper that wraps chocolate biscuits, receipts, postcards, newspaper clippings and even, on occasion, an actual bookmark purchased for the purpose. You can track where she was when she was reading by what she’s used to mark her page. The one thing that she doesn’t do, thank goodness, is fold the corner of the page down.

Me?  I don’t use bookmarks.

Sometimes it’s because I’ll read the book entirely in one sitting so I don’t need one. Other times, I remember the page number. I don’t know why I don’t use bookmarks, I have plenty of them. Everybody knows that I like reading, so I usually get a few novelty bookmarks every year as part of Christmas and birthday gifts. At the moment they all sit crammed onto a bookshelf, unused and unloved. I just find it more natural to remember a page number.

Now that I read on my iPad a lot, I have no need of a physical bookmark as the Marvin app I use automatically keeps my place. Perhaps the next time I go to visit Beth, I’ll take my collection of book marks with me to give to her! 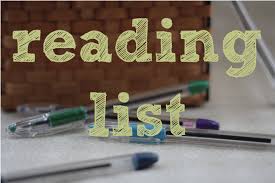 In an attempt to make paying for this website worth it, I’m really trying to post more often! So, I’ve downloaded a list of journal prompts for June, and I’m going to use them here, instead.

So, books in my to-read list. Thanks to my bullet journal, I have one of these now! They’re mostly to be published, but that still counts!

I have a long standing grudge against Ms Rawn; having devoured her first two fantasy series as a teenager, I dived into her next series with unbridled enthusiasm, gobbling up the first two books. I went to university, eagerly anticipating the release of the final book in the trilogy…and that was nineteen years ago.

I know that there have been many extenuating circumstances explaining why she never wrote the third book, but it irritates me that she’s gone on to write a few stand alones and a new series and never gone back to write The Captal’s Tower. Or even tell us the ending, if she can’t or won’t write the book. What’s more irritating is that the Glass Thorn series is really, really good and I can’t wait for the fourth book.

Another fantasy series, this time by a British author set in London where PC Peter Grant, newly minted member of the London Metropolitan Police Service has just discovered that magic is real, and that the Met has a division to deal with ghosts, magic, river spirits and all sorts of weird crap that the normal police officers pretend not to notice. He is taken under the wing of Britain’s last surviving wizard and moves into The Folly, the last bastion of formal magic in the UK. Funny magical realism? A blend of science and fantasy, with a dog called Toby? Yes please! I can’t wait for this one to be released in October of this year. All the others have been fantastic.

This is out at the  moment, and seems to be a more serious version of the books above. Paul Cornell has written for Doctor Who and I like the sound of the blurb, so I’ll give it a go when I’ve got time this summer.

Not a new book, sadly, but the published script of the new play that I will never get tickets for! It doesn’t matter! I’ll take it! Available from July 31st 2016.

Libbie Hawker, Take Off Your Pants! Outline Your Book For Faster, Better Writing

This was recommended on Facebook. I’m always trying to be a better writer, so it can’t hurt to read it and see what she recommends. You never know, I might just learn something!

George R R Martin, A Song of Ice And Fire Series Book 7, The Winds of Winter

Ah, the Great Glacier himself. I have been reading A Song Of Ice and Fire for twenty years now, and the series still hasn’t finished! The time it takes him to finish a book is a bone of contention for many fans, but I’m prepared to wait if it means we get a great book! Sample chapters have been released for this book, so it must mean that we’re close to getting a release date! The TV show has been great, but I’m a book reader first and foremost, so seeing characters do things that I know they didn’t do in the book (marry, die, change their name, come back from the dead, murder their children, etc) is a bit strange.

I’m just hoping that George gets to finish his series, unlike poor Robert Jordan. Thankfully, I bailed on The Wheel of Time series around book six. I wanted to have them all ready to read one after the other rather than hang around for the next one. Binge reading, if you will. I haven’t bothered to finish the series. Perhaps I’ll start it again now that the series has been finished.