Cancel your plans and charge up your Kindles – The Victorian Vices Book 4 will be available on the 21st April 2017!

In Spanking Lady Lavinia we meet the wilful Lady Lavinia Carstairs, youngest sister of the Earl of Beaumont, hero of Spanking The Heiress. She’s been a handful since the day she learned to walk, and she’s only got better at it as she’s got older!

The only man who has a hope of reining her in is William Evans, her brother’s private secretary. Sparks fly between them, but his humble birth means that a future together is impossible in Victorian London’s rigid class-driven society.

At least, it would be, if William Evans really is who he says he is….

I’ll post the cover as soon as it’s made by the fabulous people at Blushing Books! Meanwhile, have  a look at Flora by Titian, the painting that draws William and Lavinia together when William first applies to join the Beaumont household.  A shocked William is introduced to Lavinia’s rather inappropriate sense of humour in the sneak peek snippet below! 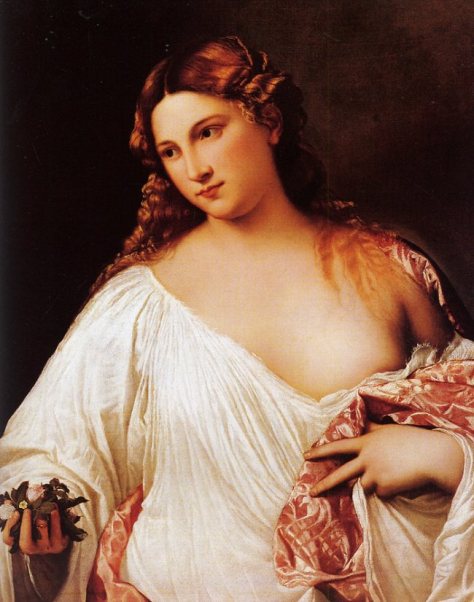 He walked up and down the foyer, admiring the artwork on the walls. One in particular, right at the back near the discreet door for the servants’ use, caught his eye.

It was a Titian, he thought, although he could not be sure. The incredibly minor public school he had attended had not spent a great deal of time on the study of art. The painting was of a woman, with reddish-blonde hair that fell loosely over one bared shoulder. She was wearing a sort of nightgown, William thought, one that dipped scandalously low over her breasts and off one shoulder entirely. A reflection of colour from the pink shawl draped over her left arm drew his eye – or wait, was that a hint of rosy nipple that could be seen?

He couldn’t be sure. Without realising what he was doing he peered a little closer at the picture, and started back in alarm when a rather young, cultured, female voice said loudly,

“It’s her nipple, you know. Well, not the full thing, just the bit around the edge. Mama and Anthony had a huge row about whether it was indecent or not. Anthony played the earl card and got it hung in the foyer, but Mama made Nash move it to the back. It’s ridiculous, don’t you think? It’s not as if we don’t know what nipples are, after all.”

William whirled around to see a confection of a young woman standing on the staircase that led up to the private, family rooms of the house. She was tall and quite striking – not conventionally pretty, not with that nose and that chin in combination with each other – but she was possessed of a wicked smile that lit up her eyes. She was dressed in the height of fashion, William could tell, although he knew nothing about how women clothed themselves. She was wearing pastel shades, which rather made her resemble a flower, although with that mouth on her, she was very much a wild flower, rather than a hot house rose.

He didn’t think that he had ever heard a woman say the word ‘nipple’ before. Especially not one who couldn’t be more than sixteen years old.

“I wasn’t…” he began, his words starting to trip over themselves. “I mean, I was looking for the artist’s name. I’ve never seen…”

“Oh, it’s one of the Italians,” the girl said dismissively, descending the stairs and floating across the marble floor to stand beside him.

“Titian, I think. It’s called Flora. It’s not a patch on some of the ones we’ve got upstairs. She’s rather wishy-washy, don’t you think? All that staring off into the middle distance with an enigmatic look on her face. You can’t tell anything about her, except that she must be a bit chilly.”

“Her clothes are falling off, so she must be cold,” the young woman said helpfully. “Although she is in Italy, after all, so perhaps she’s warm.”

A mischievous look crossed her face, and somehow, instinctively, William knew what she was going to say next, probably because he was also thinking it.

“She must be warm,” she said decisively, “otherwise her nipples really would be showing through that dress!”

She burst out laughing, a real, unadulterated laugh, not the pretty giggles that the very few young women of his acquaintance seemed to be in favour of. William hesitated, part horrified at her lack of decorum, part intrigued by her forthright nature.

“Lavinia!” a female voice called from above.