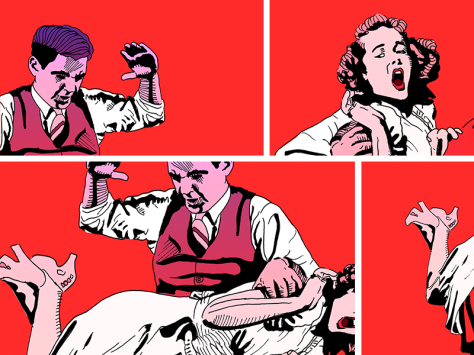 Oh dear. I think I might be about to say something controversial.

Won’t be the first time, and won’t be the last, so here we go: I don’t understand why spanking novels are as popular as they are.

Yes, I know, I know. I only write spanking romances. It seems stupid of me to bite the hand that feeds me.

However, the thing is that I try to read as many other spanking romances as I can and I’ve discovered that many of them do nothing more than anger me. I wanted to know how other authors dealt with the problems that challenge me whenever I fire up the laptop, and instead I find that they don’t deal with them at all.

Alright, let me try and be more clear.

I’m a feminist. I believe in the equality of men and women. I also believe that sex is fun, and whatever you do in bed is perfectly fine as long as everybody is on board with it. If I choose to play a submissive role sexually it has no bearing on how I expect to be treated outside the bedroom. If I choose to extend that role into my life outside the bedroom, then I would expect to have the respect of the dominant.

The key words in the previous sentences are choose and respect.

My problems as a writer, especially of a writer of historical fiction, are many and varied. My sentences run on too long, I disagree with my editor over the use of the Oxford comma, I seem disinclined to use exclamation marks and I seem incapable of writing a woman being sexually abused and call it a romance.

So many of the books I have read in the spanking genre seem to think that if the couple in the book have a disagreement, the dominant is perfectly within his rights to spank (or whip, or paddle) the submissive until she changes her mind. This is what I have real problems with. A couple will always have disagreements. They will argue, they will act in ways that annoy or frustrate the other. However, instead of talking out the issue first, explaining their point of view and their actions, so many books leap straight to the ‘punishment’ of the submissive for daring to disagree with her dominant. Only after the punishment, and often sex, does the dominant let the submissive explain her actions.

This makes me itch inside. I can understand a dynamic where one partner willingly gives up their authority over their body to another, and will accept judgement on their behaviour, leading to punishment. What I can’t understand is a submissive partner putting up with a dominant who spanks first and listens afterwards. How poor does your sense of self have to be before you’ll tolerate that happening to you? That isn’t a man acting without thinking because he’s so madly in love with his partner that his feelings are overwhelmed. That’s domestic abuse!

The trickiest thing for me to write in my books is the idea of consent, especially as I write historical fiction. The idea of a man beating his wife was considered understandable then, even if it was something that made people uncomfortable. Even with that get-out clause, I still struggle. I don’t like reading about women being abused by their partners, so I won’t write that. Yet I still have to find a way to get her over the hero’s knee (or spanking bench, or library table, or…) and liking it.

It’s hard. I don’t think that I’ve managed to get it fully right yet. I completely understand that it’s tricky for everybody. I just don’t think that some writers are trying hard enough to show that there’s a difference between a woman willingly handing her autonomy over to a partner who cares for her well-being and a woman who’s in a relationship with somebody who likes the domination and punishment, but isn’t so keen on accepting that the submissive partner has the right to be listened to and cared for on more levels than just the sexual.

Just my opinion, but one that makes it hard to find what I consider “good” spanking fiction. If anybody has any recommendations, I’d be glad to have them!