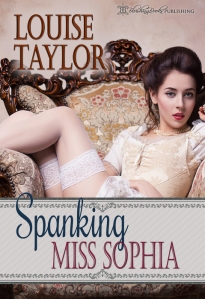 Read the first chapter of Spanking Miss Sophia on my WordPress blog here!

Available on the 22nd October from Blushing Books, Amazon.com and Amazon.co.uk!

The Duke of Dorset is having a very bad day. One moment he is enjoying life as a single man in possession of the most beautiful mistress in London, and in the next he finds that he has inherited the guardianship of two orphaned cousins, daughters of his black-sheep uncle, the Earl of Shrewsbury.

These very young, very troublesome country cousins arrive as a package deal, along with their older half-sister, Miss Sophia Preston. She is a feisty, opinionated young woman of marriageable age, a stepdaughter to the deceased earl, in fact, who is determined to return her family to the countryside where they belong.

Sparks fly as Miss Sophia clashes not only with the duke, a thirty-year-old confirmed bachelor, but also with the duke’s mother, a grande dame in London society. The duchess has little patience with two small, difficult and noisy girls, and even less with their unrefined and yet outspoken country mouse of a half-sister.

Still, all the heat and friction produced amongst those three is nothing compared to the firestorm that ensues when the duke’s mistress, a courtesan of the very highest rank and quite full of herself, discovers that the duke is beginning to see Miss Sophia in an entirely different and quite romantic light!

One thought on “Free first chapter of Spanking Miss Sophia!”