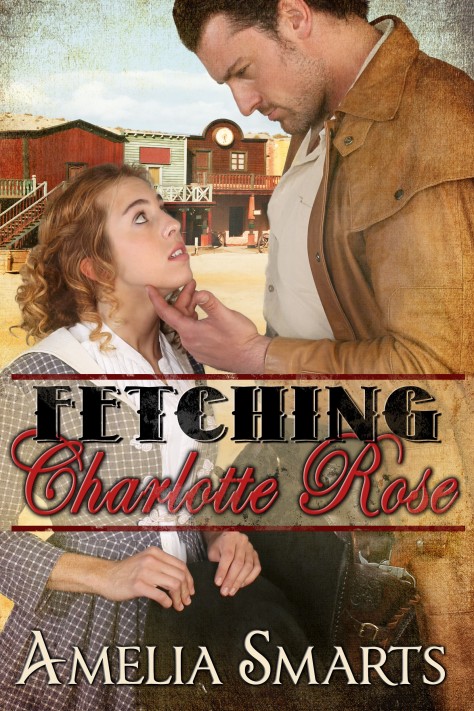 As soon as she steps off the train into the hot western sun, Charlotte Rose wonders if she has made a mistake. Leaving Boston to take a job as the schoolmarm of the small town of Weston, Arizona had seemed like a good idea, but the man sent to fetch her from the station almost changes her mind. The handsome but uncivilized brute who introduces himself as Max Harrison not only calls Charlotte by her first name, he even demands that she change her outfit.

Her humiliation is complete when, after ignoring his advice to put on something more suitable for the summer weather, she faints from the heat. To her utter shame, Charlotte is forced to endure being undressed down to her underthings to cool down, and worse still, Max warns her in no uncertain terms that any further foolishness will earn her a sound spanking on her bare bottom. Yet somehow, despite his threat to chastise her in such a barbaric fashion, Charlotte cannot deny that being in Max’s presence sets her heart fluttering like nothing ever has before.

Though she may be the feistiest woman he has ever laid eyes on, Max finds himself longing to see more of Charlotte—much more, in fact—and when he discovers that she feels the same way, he sets about courting her. But Weston is a very different place from Boston, and Max makes it clear to Charlotte that he will do whatever needs doing to keep his girl safe, even if that means taking her over his knee for a good, hard spanking as often as her behavior warrants it.

Charlotte’s love for Max grows deeper with each passing day, but she cannot help wondering if he sees her as nothing more than a silly girl in need of his constant protection, and matters come to a head when a violent, hateful man with a grudge against Max seeks to disrupt their lives. Will Charlotte’s pride be her undoing, or will she finally get the chance to prove herself to Max?

“The last thing I want is to break your spirit. I don’t want to change who you are, Charlotte. I find your cheek and smart mouth quite adorable, to be honest, but when it comes to health and safety, I don’t wish to hear your tart replies or arguments. I want you to listen to what I say and obey it.”

He lifted her other petticoat. Only her thin drawers protected her tender seat. He settled his hand on her bottom, and she felt the same current of arousal she’d experienced earlier in the day when his thigh touched her knee, only this time the feeling was much, much stronger.

He gave her seat a few light pats and rubs. “Ten swats, Charlotte.”

The rubs heightened her arousal, but it was quickly replaced by alarm when he inflicted a punishing swat on her right cheek. She gasped with surprise. Before she could exhale, he landed another on her left. The emptiness of the schoolhouse allowed the swats’ echoes to ring in her ears as the sting spread over her bottom.

The next three slaps fell briskly. His large hand covered both cheeks at once, landing low on her bottom and in the same place, and Charlotte yelped and felt her eyes fill with tears. She had never felt so small and helpless, nor had she felt so much of a man’s focused attention, as she did at that moment over Max’s lap.

The Unbraiding of Anna Brown – Hardened widower awakens from grief when met by a sweet, headstrong young lady in need of some old-fashioned discipline.

Missy Meets the Marshal – A troubled woman in need of protection and discipline meets a tough marshal, whose job it is to provide both.

I’m an avid reader and writer of spanking romance novels, usually involving a cowboy, always involving a firm hand and a scorched ass. If you were to peek inside my Kindle, you’d find plenty of spanking romances as well as books by John Steinbeck, Margaret Atwood, Gillian Flynn, and other authors from disparate genres. What all of my favorite stories share are complex characters who draw me into their struggles and successes.

One thought on “Enjoy Fetching Charlotte Rose by Amelia Smarts!”