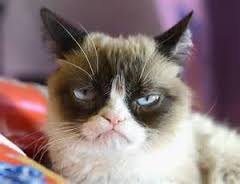 Well, there’s one. Misuse of the ellipsis. Ellipsis is not supposed to be use to create a cliffhanger, or a long pause. Ellipsis is used to show the intentional omission of a word or words from a sentence. That’s it. It’s been co-opted for a lazy purpose, and I don’t like it. I never use it that way in my books, and it drives me crazy when I see other writers using it.

I’m borrowing this one from Book from Firefly, but there is a special hell for people who talk in the theatre. I’m including the cinema in this, and I will be the person who leans forward and tells you off for ruining my experience. I have no fear in this regard.

People who don’t parent their children properly. I know from a brief babysitting stint just how frustrating it can be looking after a three year old, and I only had to look after her for three days. Being a full time parent is a very hard job, and it deserves respect. But if you catch your child hitting another one, and then smack them as a punishment, or catch them swearing and shriek “Don’t fucking swear!” at them, then I think you’re falling down on the job. If you take your child to a public place, like a restaurant, and then don’t try to keep them occupied, then I think you should take them home. I’m paying for my dining experience too, and I don’t want to do it while your bored child is running about the place shrieking.