Tell us about a sensation — a taste, a smell, a piece of music — that transports you back to childhood.

This is such an odd thing to realise, because it’s not like I can’t get citrus fruit year-round, but I always associate the smell of tangerines and clementines with Christmas.

When I was younger, there would be loads of these around at Christmas time. My brother doesn’t particularly care for fruit, so I would share them with my mother as we watched tv together. The slight spray as your fingernail breaks the skin coats your fingers, and if you’re careful, you can strip the entire fruit in one long strip of waxy, orange peel.

The taste is sweet and sharp at the same time, and they’re just so moreish – once you start eating them, you just can’t stop! Even though I can buy these all through the year, I always associate them with Christmas, even if I’m eating them in July. I can still picture the ceramic fruit bowl that would sit on the coffee table piled high with these little beauties, next to a bowl with nuts in their shells and a packet of sticky dates.

Now I buy these by the case in December, as I go through them like wildfire! 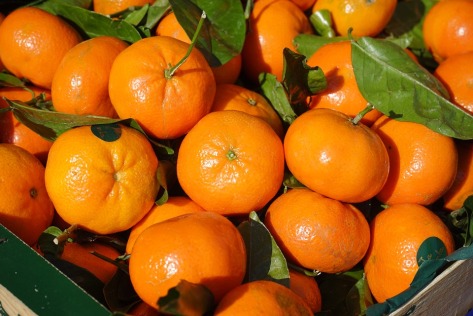 I’m really into my sci-fi, so this looks like a must-read! 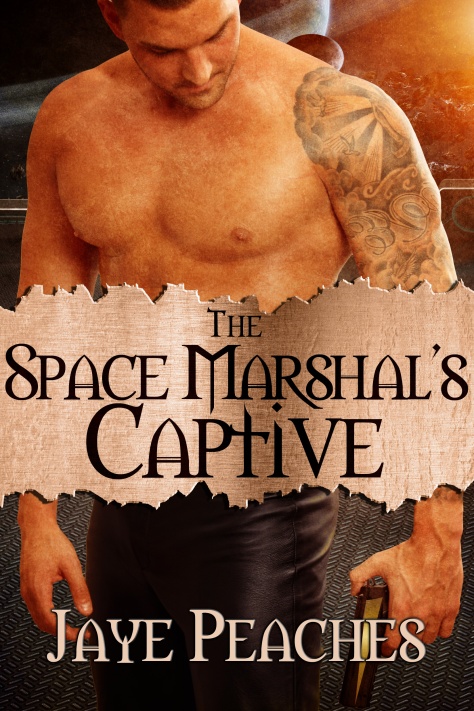 He’s going to pleasure her in ways that her darkest fantasies never touched.

After nineteen-year-old Jade Kryst is caught by space marshal Mason Hadley while trying to smuggle supplies to a rebel-held planet, she quickly discovers that her captor is not a man to be underestimated, and when she fails to cooperate with a thorough strip search she ends up with blushing cheeks and a sore bottom.

Though he does his best to remain professional, Mason is drawn to his beautiful, feisty captive, and he strikes a deal with her. If she will use her skills as a mechanic to keep his ship up and running while he hunts down the dangerous criminals he is pursuing, he will set her free once they are apprehended. Jade accepts his offer, but it doesn’t take long for Mason to realize that keeping her in line will require a firm hand frequently applied to her bare bottom, along with even more humiliating punishments when her continued disobedience makes it necessary.

Despite her status as his prisoner, Mason’s stern dominance leaves Jade burning with desire, and when she surrenders herself to his masterful lovemaking it is better than she ever dreamed. She soon finds herself falling deeply in love with the handsome space marshal, but will there be a place for her by his side after his mission is over?

Mason stopped outside the medical bay. “In there, now.” He jabbed his thumb at the door.

Inside, he paced the room with his hands on his hips while Jade wrung her hands together. “So,” she said jovially. “I fucked up—”

“Shut it,” he said curtly. “I know what you did. I don’t need an explanation of why. I guess you feel some kind of loyalty toward your smuggling friends, so you decided to try to escape. Laudable, I get it.” He halted right in front her, staring down his long nose. She spied a small cut on his temple, glued closed and cleaned. He made no reference to his injury.

“Yes, you can. You can give up endangering yourself, this ship, and me. You can give up thinking that you’re on a personal one-woman crusade to save a whole planet. You can start by thinking about consequences.” He spoke quietly, almost too quietly, and it made the hairs on the back of her neck stand on end. An angry man should shout and curse, shouldn’t he? This one didn’t. What he articulated was blunt and to the point. Towering over her, he had the strength to overpower her and show his dominance in an aggressive way. Clearly, it wasn’t his style. He expected obedience.

Trapped, but unbound, the best course of action would be to relinquish her body to him and accept her fate. Jade rocked back on her heels and couldn’t think of anything to say.

Jade instinctively clenched her buttocks at his sternness—such a voice he had when dishing out those words, it almost dazzled her. Her ass cheeks had stopped throbbing, the physical impact of the last spanking had faded. She guessed it wouldn’t be long before they were sore once again.

She cleared her throat. “I suppose you want me to strip.”

He nodded, unsmiling. “Yes. Then bend over the table.”

Mason sighed when he spied her tears on her cheekbones and wiped them away with his thumbs. “You’re not that old, are you? I guess you passed into womanhood recently?”

She nodded, hating her appearance—she wasn’t that young, she’d been a student for several years, but somehow, she’d held onto that girlish look, never quite grasping the maturity of a woman. It was misleading, because in her heart, and when she compared herself to her friends, she was years ahead of them in confidence and independence. Or so she thought, because Mason possessed a much greater authority on the subject of independence than her and he swiftly reminded her of that as he spoke.

“And here you are, on your own, navigating the wildest part of our galaxy. Speaking as someone older than you, I don’t think it’s wise, do you, being on your own and so inexperienced?”

She answered with a shake of her head. Wisdom came with age—she agreed with him on that point, but she really didn’t want his observation to be true.

“I’m going to take you to your ship.”

She lifted her head, her eyes widening with disbelief—he’d changed his mind!

“To collect your personal belongings for your stay in the cell,” he continued. “First, let’s get you dressed. We can pick up your clothes on the way.”

She slouched her shoulders, disappointed that she’d failed to dent his armor. He wasn’t going to let her go that easily. Jade said nothing and her muteness was an unfamiliar response. She’d temporarily lost the ability to answer him back. It seemed spanking her had had an impact on her demeanor. The realization somewhat surprised her. What else was Mason capable of doing to her?

The kiss was long, hard, and exactly what she wanted from him. He drew her into an embrace and spread his fingers along her spine, feeling his way up and down her back. Her panties remained coiled around her ankles and she didn’t care that he had access to the wetness between her thighs. Her pussy had been drenched with adrenaline-soaked excitement the moment his breath had mingled with her own. The sensation was electrifying and irreversible. Her liquid nectar was there, ready to greet his entry, his full-on thrust—if that was what he really desired.

“We’re not supposed to be compatible.”

“Let’s prove them wrong.” She rested her hands on his shoulders and squeezed.

“You don’t understand. On Ixzar, I would take you, force you to come many times, taking my pleasure. I need to control sex as much as I need control over this ship, my prisoners. You.”

She licked her lips, tasting him. “This isn’t going to be about just my pussy, is it? This fuck is something I’m never going to forget.”

She spread a big grin across her face. “You’re very sure of yourself, sir.”

“I am.” He took her wrist and directed her hand down toward his pants where the obvious bulge tented the loose fabric. Beneath she felt the bold hardness—a scaffold of steel. It was upright, bursting for relief, and probably painful for him to contain.

“In your mouth, your pussy, and your ass,” he continued. “Here. Now. And you’ll obey me. Then, later, we can do it the slow way, the way of your people.”

She’d no point of comparison, only her own experiences, which had been energetic and brief. Jade swallowed hard, losing the smirk. “My people aren’t exactly gentle—”

He shook his head. “Jade, this isn’t going to be lovemaking. We’re not there yet. I don’t know if… I’ll try for you, try to be that kind of man.”

“I think you will. I believe you can. I know it here.” She pressed her other hand to his chest and through the shirt she discerned the drumming beats of his heart. “Here is where it counts, don’t you think?”

“Rise up, sweetheart, and mount me.”

Sliding her legs on either side of his thighs, she hovered astride, angled her hips and lowered herself, seeking out his rounded glans, slotting it between her swollen lips. He felt thicker than ever or maybe she was tighter; either way, the fit was snug and the friction wonderful. Once her bottom touched his thighs, she paused, savoring the pinching sensation, then the give as she stretched to accommodate his girth. She jutted her breasts forward, arched her back, and rested her hands on his knees.

The sparkle in his eyes intensified as she bucked and rode his rod, frantically trying to avoid his cock hitting her sweet spot. She huffed while she fought the arousal and failed to crush it. Noisily, she moaned, probably too loudly. It was then that he started to roll her nipples between his fingers and thumbs, tweaking them until they hurt. She panted, tussling with the need to come and annoyed by his interference—couldn’t he see that she was struggling? He grasped her ass cheeks and hitched her up higher. She was in danger of losing contact with his cock. Alarmed, she grabbed his shoulders to steady herself.

Feeling his strength beneath her fingers was tantalizing. She started to pick at his shirt, hoping to expose his skin, touch it with her fingertips and enjoy the smoothness of his bare chest.

“Hands behind your back,” he ordered and reached into his shirt pocket. The restraining bands on her wrists snapped together, binding her. The ankle ones had gone—he’d removed them as a reward a few days after they first fucked. Now, she would have to rely on his support to keep her balance and rhythm.

Binding her didn’t dissuade the rising force of her impending orgasm; instead, it enhanced the fire coursing through her body. The electrifying epicenter was her clitoris.

If she came, he’d spank her. She imagined herself across his lap on the commander’s chair, the seat of his power. The picture in her mind created a wave of goosebumps erupting across her flesh.

She came and the suddenness stunned her. She’d not even had a chance to plead with him. He would feel the orgasm along the full length of his buried shaft—a multitude of spasms, strong and conspicuous, accompanied by her stifled screech.

He flexed his hand—his intention was obvious.

When not writing, I’m busy spending time with her family, enjoying music, sometimes drawing and if the weather allows, gardening.