What was your favorite book as a child? Did it influence the person you are now? 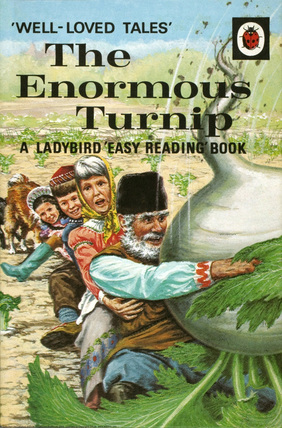 Now, to be completely honest,  I can’t actually remember this book myself. This was, apparently, my favourite story when I was about three and my parents hated it. It was one of those stories that was all repetition: the farmer has grown an enormous turnip, but it’s so big that he can’t pull it up out of the ground. So, the farmer’s wife joins him, and they both pull, but they can’t budge it, so the farmer’s son joins them, and they pull, but they can’t move it, so the farmer’s daughter joins them….and so on down the line until I think a mouse helps them, maybe? Lots of farmyard animals get involved, anyway, until the damned turnip is uprooted. The cover, perhaps, gives away the most exciting moment in the story!

I would ask for this story all the time.I had that obsessive desire for it that little children seem to have for things – no other story would do.  Despite the fact that I had a wide variety of Ladybird fairy tale books, this is the one I would hone in on, and as my parents were determined to foster a love of stories and books in me, they would give in and read it to me. However, my fervor for the story of the enormous root vegetable got so annoying for my poor parents that my father, no doubt in a moment of inspiration, asked me if I would like to learn to read the book myself, so I wouldn’t have to wait for him or my mother to read it to me.

Now, I’m not claiming that I was a child prodigy or anything, but because of that I was reading a lot earlier than other kids in my class, to the point that when I was five and joined infant school, they had to give me reading books for pupils several years older than me. That started me on a path that ended up in an English Literature degree. I read really widely as a child, and pretty much burned my way through the children’s section of our local library, which thinking about it now, was pretty limited. That’s why I read so many old fashioned books, I think – all the Travers Mary Poppins books, all the Oz books, the Swallows and Amazons series. I read the Just William books, the Biggles books, and the What Katy Did books because that was what the library had. There weren’t any young adult books then, as such.

My father got me an adult readers ticket from a clearly disapproving librarian, who tried to warn him that adult books might contain adult content. I still remember how my father’s eyes rolled at the warning, and how he told me, very simply, that if something in a book upset me, I should just shut the book and read something else.

That, I feel, is advice for life. If you don’t like something, fine, not a problem. Close the book, hit the back button, turn off the tv. You don’t have to clutch your pearls and start a crusade against it. The people that froth at the mouth about Harry Potter books, for example – you don’t like them? Fine! Don’t read them. Problem solved. Don’t try and get them banned from schools and libraries just because these made up stories seem to conflict with the made up stories that you think are important!

So, that’s how I met P G Wodehouse, Agatha Christie, George Orwell and so many other amazing writers. My love affair with Terry Pratchett started because of the adult library ticket. One of the funniest writers I’ve ever had the pleasure to read, Joe Keenan, was found in that library. I read historical non fiction and developed an interest in life centuries ago because those books were in the adult section.

I got an adult ticket because I’d mainlined the children’s section at a young age; I was an advanced reader because I had started young, before school started. I had started reading early because I was in love with a particular story that drove my parents crazy. Their desire to never read that damned turnip book again was what prompted them to try and get me reading much earlier than you would usually expect a child to read.

So all my love of the written word, including my higher education, my day job and my new career as an author, comes back to a fairy tale about an enormous turnip. Thank goodness they bought me that one, and not a different one. Who knows what would have happened?